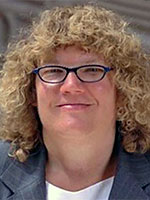 The Hilton Head Workshop is pleased to announce the 2022 Denice Denton Mentorship Award. This award recognizes long-term mentors with a proven record of mentoring researchers and engineers in the areas of interest to TRF.

The award is given in honor of Denice Denton (1959 - 2006), who earned her BS, MS and PhD in electrical engineering from the Massachusetts Institute of Technology, and then went on to a groundbreaking career in academia.

Denton was a prolific and influential mentor who not only supported colleagues but also remedied the marginalization of those not in positions of privilege and power, using strategies she developed while surmounting daunting professional obstacles of her own. She founded and sustained informal, lively peer support groups, made connections to advocates in positions of power, sought out and shared information about institutional procedures, and even helped with fundraising for legal fees in some cases. She lived out her ideal of institutions in which people could thrive personally as well as professionally.

In a speech to the National Academies, former Dept. of Health and Human Services Secretary Donna Shalala said of Denton, "She was bigger than life. She opened doors, and stood in them to let others through."

Selection Process
Nominations are solicited from technical leaders from the public and private sectors in the areas of interest to the TRF. The Awards Committee will evaluate the submissions and select the awardee based on the submitted nomination package. The committee reserves the right not to issue an award in any year if a suitable nomination has not been received.

Award Nomination Package Nomination Process
The nominees must attend the 2022 Hilton Head Workshop in person to receive the award. The nominators must submit their complete Nomination Form (pdf) via email to awards@hh2022.org by May 1, 2022.